Since its inception, Multitek has focused on electronic development, production, sales and after-sales service communication devices. The company has been one of the most important manufacturers of touch panels and iPhone panels in Turkey since 2000. Today, Multitek has more than 150 employees, 8 branches in Turkey and more than 500 sales and after-sales services. Multitek also exports to more than 20 countries, including the Middle East, Africa, the Balkans and Asia. 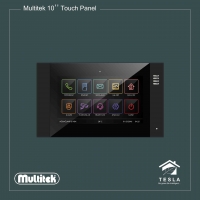